Why are Indian policemen firing at each other? 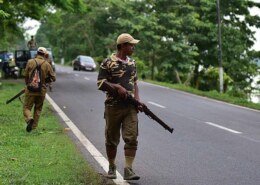 At least five policemen in India have died after police from two states fired at each other.

The unusual incident happened along the border between Assam and Mizoram states in north-eastern India.

Officials from both sides, including chief ministers, have accused each other of provoking violence.

The firing incident follows months of simmering tensions over a long-running border dispute between the two states.

Assam shares a 164km (about 101 miles) border with Mizoram, and both states contest its demarcation.

The two sides have often sparred over it, sometimes violently. But this was the first time police in the states had fired at each other in a direct confrontation. The officers killed in the attack were from Assam.

The federal government has been trying to mediate a truce between the states since 1994 but has failed to achieve a breakthrough.

On Monday, Home Minister Amit Shah reportedly spoke to the chief ministers of Assam and Mizoram – Himanta Biswa Sarma and Zoramthanga – and urged them to ensure peace along the disputed border by finding an “amicable solution” to the problem.

Answer if you know about this.

You must login to add an answer.

Continue with Google
or use