Were these the best games at UEFA EURO 2020? 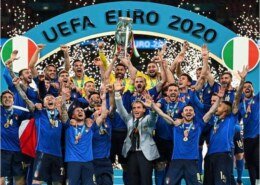 9/06: Portugal 2-4 Germany (Matchday 2)
Group F promised some mouth-watering action with France and Hungary pitched in alongside these two heavyweights. Any questions posed by Die Mannschaft’s tame loss to the world champions resounded once again after Cristiano Ronaldo’s opener in this Munich showdown – but the German response was emphatic.

Two own goals turned the tide before half-time, then Kai Havertz and Robin Gosens put the holders to the sword inside an hour – and left Portuguese hopes of progress in jeopardy. Incredibly, it was the first time Germany had scored four goals in a group match, and the stage appeared set for Joachim Löw’s side to kick on. However…

23/06: Germany 2-2 Hungary (Matchday 3)
All of Germany’s EURO 2020 goals
Despite their spirited 1-1 draw with France, Hungary were not expected to present a significant hurdle for the purring Mannschaft in Munich. Nevertheless, Ádám Szalai’s header quickly put the cat among the pigeons. It took Germany until the 66th minute to level through Kai Havertz, and even then their relief was fleeting because, 16 seconds after the restart, András Schäfer restored the underdogs’ advantage.

Löw’s charges mounted a siege but were within six minutes of elimination when Leon Goretzka pounced on Timo Werner’s blocked shot to rifle home – nudging Germany into the last 16 and leaving Hungary forlorn.

28/06: France 3-3 Switzerland, aet, 4-5 pens (round of 16)
Highlights: France 3-3 Switzerland (4-5 pens)
The dust had barely settled on Spain’s victory when these two wrote the second chapter of ‘Manic Monday’ – the highest-scoring day of knockout action in the history of the finals. The script was eerily similar, with the underdogs going a goal up only for the favourites to roar back to lead 3-1, Karim Benzema scoring twice for Les Bleus before a moment of genius from Paul Pogba.

Switzerland, who might have led 2-0 but for Hugo Lloris’s penalty save from Ricardo Rodríguez, refused to surrender: Haris Seferović’s second header and Mario Gavranović’s last-gasp drive earned extra time, where the Nati held firm to take this Bucharest thriller to penalties. The shoot-out was first class too, with the first nine spot kicks converted before Yann Sommer kept out Kylian Mbappé to give the Swiss a first major tournament knockout success since the 1938 FIFA World Cup.

You must login to add an answer.

Continue with Google
or use